‹
›
Home » From the Front Lines of an African Medical Mission

An amazing, wonderful collaboration has been making a difference in the support of doctors in Africa who are severely under-supported and under-manned. Mark and Erica Gerson, who are Jewish leaders, have been supporting Dr. Jon Fielder and other Christian medical missionary doctors, who are extremely limited in number, in Africa. Mark is a New York-based entrepreneur and philanthropist, who is married to Erica Gerson, a rabbi. Mark co-founded Gerson Lehrman Group, among other companies. He is also the international chair of United Hatzalah and chair of United Rescue, a distributed network of volunteer first responders in Israel, Jersey City and Brazil. He is the author of many books and articles with subjects ranging from intellectual history and inner-city education to basketball and the biblical Jonah.

While earning his MD from Baylor College of Medicine, Dr. Jon Fielder, spent nine months with Mother Teresa’s Missionaries of Charity. After training in internal medicine at Johns Hopkins Hospital, he helped start an HIV treatment and training program at a rural mission teaching hospital in Kenya that now cares for nearly 5,000 people. His training program has equipped 2,000-plus Kenyan health workers to care for HIV sufferers.

He has also helped mission hospitals establish HIV clinics across Kenya. His textbook, “Tuberculosis in the Era of HIV,” is widely used in East and Southern Africa. In Malawi, Dr. Fielder initiated a community HIV support program, hospital ward and TB clinic. Living with his family outside Nairobi, Dr. Fielder now serves full time as president of the African Mission Healthcare Foundation (AMHF).

Mark Gerson and Dr. Jon Fielder are responsible for the $500,000 Rabbi Erica and Mark Gerson L’Chaim (“To Life”) Prize. This is an annual award for Outstanding Christian Medical Missionary Service. The two men’s friendship has continued since they were college roommates.

Dr. Howard: Tell us about the Jewish value of loving the stranger.
Mark Gerson: “Loving the stranger” is one of the most important values of Judaism. Showing goodwill to the alien in our midst is commanded 36 times in the Torah. And it is just as clear how this responsibility should be discharged. In Deuteronomy 5:33, we are told to “Walk in God’s Ways.” And ten verses later, instructions are provided: “For the Lord your God…shows no favor and takes no bribe, but upholds the cause of the fatherless and the widow, and loves the stranger, providing him with food and clothing. You must love the stranger, for you were strangers in the land of Egypt.”

In nearly a decade, I’ve seen limited resources…yield extraordinary return in lives saved and suffering relieved. The Jewish and Christian faiths share sanctity of life as the highest value.  My wife and I are gratified to honor the physicians most effectively employing resources to heal the world’s poorest and most vulnerable.

Dr. Diane Howard:  How did you become interested in sub-Saharan Africa?

Mark Gerson: Jon and I met at Williams College, MA, as freshmen in 1990. I was introduced to Jon’ s work serving the African poor in 2001. In 1996-97 Jon had worked in India with Mother Theresa. After he returned for residency at John Hopkins, where he was the top resident, he worked on the math and decided that the most could be done in Africa. This was in the height of the AIDS crisis there. In 2001 on a trip back from Kenya, he shared his work there.

Africa may be a continent composed completely of strangers to us. It is geographically distant, it tends to surface in the media only in times of catastrophe and recedes as quickly. And there is, relative to other regions, less educational and commercial exchange between the West and sub-Saharan Africa.

Dr. Diane Howard:  What are the foundational needs in Africa?

A young Burundian heals in a hospital ward that may house up to three patients per bed. In the boy’s entire country, outside the capital city the only treatment for leg fractures is at Kibuye Hope Hospital. The L’Chaim Prize will help doctors keeps more Burundians on their feet.

Mark Gerson: They are related to the lack of medical professionals. Malawi, Tanzania, and Sierra Leone have a single doctor for every 30–50,000 people. The largest percentage are Christian missionary doctors.

According to one estimate, more than 50 million Africans are in need of surgery today. This extraordinary number of people at risk of death or debilitation from problems that have been easily solvable in the West for generations: broken bones, complicated pregnancies, clubfoot, hernias, cataracts, burn scars. We might not realize that only 20% of African women who need a C-section get one, or that birth injuries which result from obstructed labor can be repaired for a few hundred dollars.

Dr. Diane Howard: What are the needs for basic health services?

Mark Gerson: This problem is not all limited to surgery. Access to even basic health services is inadequate. Most developed and developing countries (including Russia, Greece, Israel, the United States, Iceland, Portugal, Kazakhstan, South Korea, Finland, Mongolia, Lebanon, and Spain)  have a doctor for every 200–400 people. And then there is sub-Saharan Africa. Malawi, Tanzania and Sierra Leone have a single doctor for every 30–50,000 people. Other countries in the region face similarly dire shortages, especially in rural areas.

The consequence of this scarcity is clear. If a child falls and breaks a bone, if a woman is having difficulty in pregnancy or childbirth, if a baby is born with a physical deformity, if a young adult is coughing blood from TB, if a parent is wasting from AIDS — they are unlikely to see a doctor quickly or at all, and even less likely to see a specialist. The human suffering, the physical pain and the psychological devastation, not to mention the educational and economic side effects — it’s staggering. Imagine not being able to help a child with a curable condition!

Dr. Diane Howard: Tell us about the prize for Outstanding Christian Medical Missionary Service that you have established with Mark Gerson.

Dr. Jon Fielder: It is for doctors who come to work long-term in Africa. Most of them are from the U.S., Australia, or Europe, who are willing to serve strangers in Africa.

Dr. Diane Howard: Who has applied for this prize?

Dr. Diane Howard:  What kind of work do these applicants do?

Dr. Diane Howard: Who is on the selection committee?

Dr. John Fiedler: The selection committee consists of current and former medical missionaries, African healthcare experts, and on-the-ground clinicians. They have all been on the ground. They select the prize for clinical doctors. Research and public heath are valuable but the prize for doctors on the ground.

Dr. Diane Howard:  Tell us about your collaboration and friendship with Mark Gerson.

Dr. Jon Fielder: We have shared a love of history, philosophy, and ideas since before the big need for AIDS relief. He has been interested in and supportive of my work for many years. He has been able to meet patients that his support has helped. 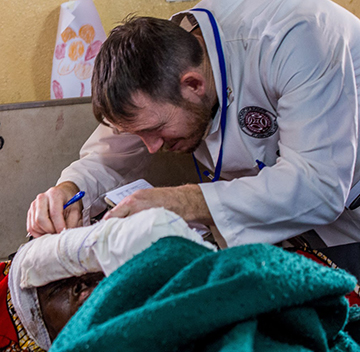 In Burundi’s Kibuye Hope Hospital, missionary physician Dr. Jason Fader checks on temporary “grafting” of an arm’s skin and blood supply to the patient’s burned face. In rural huts severe burns are common, but physicians to treat them can be a hundred miles away. The L’Chaim Prize will expand surgical care in Burundi.

Dr. Jon Fielder: In 2006 during the AIDS crisis, I saw a lot of doctors struggling for resources.

Dr. Diane Howard: How did working with Mother Theresa affect you?

Dr. Jon Fielder: I saw her humble service in meeting basic needs. I saw that I could live overseas.

Dr. Tom Catena, noted medical missionary who gave impetus for the prize, says, “The hospitals and doctors are deeply invested in the community. They stretch a dollar to incredible lengths in service of the poor…This award will transform healthcare for the winner’s institution and inspire others to join as AMHF serves those who need it most.” To learn more and to support this extraordinary service that is desperately needed, go AMHF online.

The first annual L’Chaim prize has gone to Dr. Jason Fader, who is a son of medical missionaries and is the sole and full-time surgeon outside of the capital city of Burundi. Located in the southern hemisphere, just south of the Equator, Burundi is west of Tanzania, and to the east of the Democratic Republic of the Congo.

In recognition of his efforts, Dr. Fader has been awarded the first-ever Gerson L’Chaim Prize of $500,000 for Outstanding Christian Medical Missionary Service.

“Because of the L’Chaim Prize, hundreds of people will walk, thousands will receive care, and tens of thousands will be helped by the doctors we train,” Dr. Fader said. 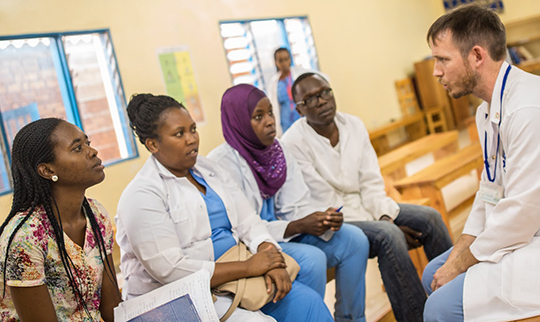 “Missionary doctors are this era’s untold humanitarian story,” said Gerson, who underwrites the prize with his wife, Rabbi Erica Gerson. “Forsaking every comfort and convenience to bring skilled compassion to the continent’s poor, Dr. Fader and his team are links in a string of unsung heroes across Africa.”

With the L’Chaim prize, Fader and his colleagues, who serve with the agency SERGE, will do the following:  add critically needed hospital beds at rural Kibuye Hope Hospital, create Burundi’s first postgraduate medical training, and expand lower-limb fracture care in a nation that travels by foot.

“It’s hard to overstate the value,” Fader said.  “In one of the world’s poorest countries, a prize of this magnitude, for one hospital, is far reaching.”

Burundi has 13 surgeons for 10 million people. Dr. Fader and his on-the-ground team are training doctors, performing surgical procedures, and upgrading and expanding medical facilities. Every team member raises individual financial support and arrives having studied both French and Kirundi. Since 2013, the team has served at the Kibuye Hope Hospital, the teaching hospital for Hope Africa University Medical School.

“To move forward, to provide higher volume and better quality care, and to train more national healthcare workers, this hospital must expand,” Fader said. He plans to serve in Burundi “for many years to come.”

At the end of his long day, Dr. Jason Fader made time to give an exclusive interview with Dr. Diane Howard.

Dr. Diane Howard: Do you feel this prize has been a source of personal encouragement?

Dr. Jason Fader: Yes, because I am an isolated surgeon here.

Dr. Diane Howard: What kind of surgery work do you specialize in?

Dr. Jason Fader: I do about every kind of surgery work.

Dr. Diane Howard: Tell us about your training program in Burundi.

Dr. Jason Fader: We have a training program for about 40 nurses and doctors. This grant will enable us to develop an internship program leading to a post-graduate surgery and family residence program.

Dr. Diane Howard: How can the body of Christ be praying for you?

Dr. Diane Howard: How can the Christian community support you and your work?

Medical care in Africa is severely endangered.  Because missions and agencies peaked in the last century, the doctors still there, and their African colleagues, receive shrinking support amid rising and complex medical challenges that range from AIDS to surgical problems to cancer. Fielder and Gerson, with friends and supporters, formed AMHF to bolster Africa’s white-lab-coat heroes and their institutions.

“God loves you and has a wonderful plan for your life.”

“Humanity is tainted by sin and is therefore separated from God. As a result, we cannot know God’s wonderful plan for our lives.”

“Jesus Christ is God’s only provision for our sin. Through Jesus Christ, we can have our sins forgiven and restore a right relationship with God.”

“We must place our faith in Jesus Christ as Savior in order to receive the gift of salvation and know God’s wonderful plan for our lives.”